Oh how I loved this book! I guess I should first tell you that I love Jane Austen, and that Pride&Prejudice is my favourite book of hers.  I will watch and read modern retellings anytime (except for that one play adaptation of Sense and Sensibility that my Mom dragged me to. I have seen children in elementary school plays act better. Seriously, it was terrible).

Eligible is a modern version of Pride and Prejudice, set in Ohio instead of Regency England.   The fact that it is a modern retelling may turn Austen purists off, but I was game to try it. For a Pride and Prejudice retelling to be spot on I always think that Mrs. Bennet needs to be totally crazy, and so utterly awful that you just cringe anytime that she is speaking. Bridget’s Mom in Bridget Jones’ Diary does this SO well (book version, the movie version is so tame). Mrs. Bennet is AWFUL in this version of the story, I don’t want to give any of the plot away, but she isn’t politically correct in the way she thinks or speaks, and her need to “keep up with the jones'” really makes her an unlikable character. Mr. Bennet is kind of a weak character in Eligible, he has kind of washed his hands of everything and just lets Lizzie take care of things.

Curtis Sittenfield has done a great job of making the characters relatable, Lizzie is stuck in a relationship that is less then ideal, and her parents are getting older and have health and financial issues. The twist of Mr. Bingley having been on a reality tv show is hilarious, Mr. Darcy is standoffish as he should be (spoiler alert, Eligible unlike Austen has sex scenes, they are great but Austen purists might not be impressed).

The oil that I suggest to diffuse while reading Eligible would be the encouraging blend. This blend contains a combination of mint and citrus oils that can help motivate and inspire an individual to have the courage to move forward with confidence and strength. Now if that isn’t an oil blend to help Lizzie with everything that she needs to do then I don’t know what is! 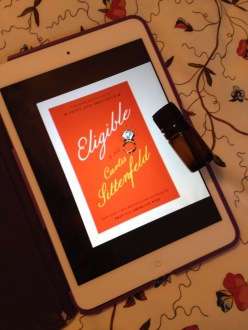 What I’m Talking About